A brief introduction to Skanda Vale

Although we have been here for forty years I’m sure there are there are still many in the locality who may like to know more about Skanda Vale and what we do. There is not enough space here to do the subject justice, so if you want to know more, please come up and have a good wander, also feel free to grab any of us you seeing running around if you want a chat.

We started off with a 20 acre smallholding. There were still steam trains running down the valley in 1973, although at that point their only job was reclamation of materials from the track, if you were lucky they would give you a lift.

The founder of the Community, Guru, (which very roughly translates as teacher), set the example of hard graft, sometimes people would turn up, expecting to laze about in the countryside; they soon found themselves double digging the veg patch, moving piles of stones or clearing the debris left by previous owners. Everybody was expected to a day’s work. In this respect things haven’t changed. Our rules for visitors still insist on a minimum 4 hours work on top of an exacting schedule of worship, the first service of the day at starting at five in the morning, and the last nine at night. 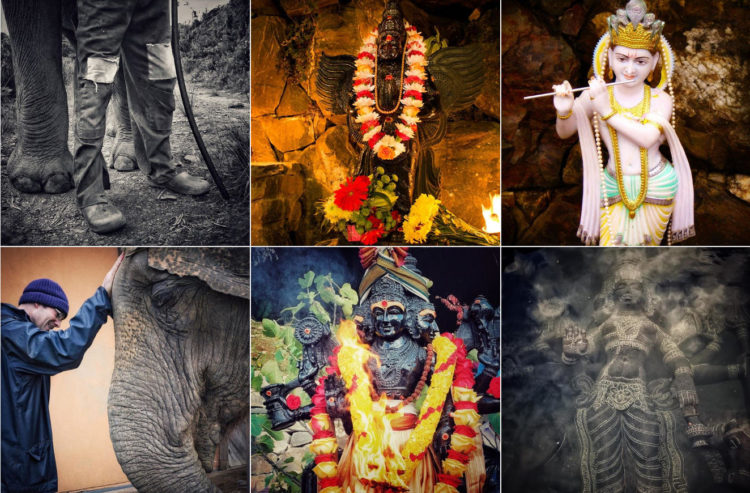 When Guru first moved to Llanpumsaint from London people thought he was mad. “No one’s ever going to travel down there”, “No one’s going to get up at 5 am”, “How will we feed ourselves?”

It is not possible to overstate the role of Guru Subramanium in the establishment of this Community. Although he died 10 years ago we are following the road map he set out and endeavouring to live up to the ideals which he exemplified. A naturally charming and charismatic individual, he could be pugnacious and obstinate when the occasion demanded it. His whole life was dedicated to the service of God, “Service to God means service to life. If there is no love, there is no God.”

The Community is composed largely of novices, ordained monks and nuns, and Swamis. Ordained community members take vows of poverty, chastity and obedience, the same vows of St Francis, who is our patron saint. In addition, there may be lay people, possibly married, who have demonstrated a commitment to this way of life.

No one is paid; we all lead a simple life with just our basic needs provided for. The community is governed on a day to day basis by a council of Swamis whose job is anything and everything from allocation of basic tasks, coordinating large projects such as the hospice rebuild, and responding to our pilgrim’s needs. The community became a registered charity early in its history and there is a group of trustees to ensure the charity fulfils its stated objectives, answerable to the charity commission.

At present the Community numbers around two dozen members. Our activities can be broadly divided into: worship in the temples, care of pilgrims, animal welfare, the hospice, education and running a food aid program.

At the centre of our lives is our daily worship. Fundamental to Skanda Vale is the recognition of all religions; although the main focus is Hindu in origin, a Christian service is held every Sunday evening, Christmas and Easter are huge, Buddhist festivals are celebrated and more importantly we never try to ‘convert ’ or change people, religion or no religion.

We have many animals, the most notable being Valli our elephant, many of these beings are rescued and allowed to live out the full natural span of their lives, recognising the divinity within them.

Likewise at the hospice (www.skandavalehospice.org) we care for the terminally ill from Carmarthenshire, Ceredigion, Pembrokeshire and beyond, running  a day care centre and an inpatient unit offering respite care, the only condition for using our service is that you have a life limiting illness, and of course this is provided completely free of charge.

Approximately two thirds of the hospice facility is funded by donations from our visiting pilgrims. The hospice is staffed almost entirely by fully qualified volunteers from the local community and ourselves. To date we only employ one full time member of staff, our clinical lead.

Many school, college and university groups visit us, some local, others from further afield, the Community and its temples providing a unique multi-faith educational opportunity.

As is traditional when coming on pilgrimage, visitors will bring donations of fresh and dried food. Last year after feeding and caring for every single person who came through our gates we were then able to donate over 70 tons of food, distributed to local, national and international charities.

It may seem strange to say as monks and nuns that not one of us would call ourselves religious. What drives us is the opportunity to serve all of life, and in so doing change and refine our being. Religion is all too often involved in rules, dogma and commercialisation.

Skanda Vale and the hospice have been built and sustained entirely by unsolicited donations, never has one penny been charged for any service that we provide. We are sustained by people from all backgrounds, from all walks of life coming together and working selflessly.